Collect modules from destroyed enemy ships to grow your own. Not happy with where a turret is attached? Pop it off and put it somewhere else! Reconfiguring the layout of your ship could be the reason you survive... or it could be the reason you die.  Survive the onslaught of enemies as you try to make your way to the warp gates.

was similar to the game i was going to make for this jam, never finished it, the only difference was the entire get to the gate thing. basiclly you had one cockpit and a booster and you were navigating around dodging astroids and collecting parts from traffic accidents, but the more you added, the bigger you would get and the harder it would be to avoid stuff... glad to see something like that make it into the jam!

hello can you please make us can change controls?

Hey there, we may revisit this project at a future date but right now it is on hold as we are working on other games. We have taken note of your feedback and will keep it in mind for future updates!

Hello, cool game, I sunk in more than 30 minutes without realizing it.

Found a bug, where my speed goes to 0 percent, the only way to fix it is to jettison a lot of parts. But when reattached I get up to 400 percent speed, even with a massive amount of parts.

whoa! That’s a fun exploit! Thanks for the heads up and thank you for the video. Glad you enjoyed the game. We have some preexisting projects we are trying to finish but once those are done we will be revisiting this. Until then, stay tuned!

Spent a few hours on the game, very entertaining, and could do better in some parts.

1. I'm not sure if this is intended but after a certain point attaching more engines will only slow the ship down, which leads to a big nono for bigger ships. I can understand that it shows how the developers wanted the game to be played but this is eliminating some of the fun in other ways of building ships. I would really want to build a battleship in here.

2. The current enemy AI is a bit frustrating for mainly two parts, the automatic super fast spin around to protect themselves which usually leaves the warp cells under direct firepower. The other thing is I noticed that enemies barely grow in size anymore after around sector 4~5, and when your own ship is getting larger, a bunch of small nimble ships ramming you like crazy and push you all over the place is seriously not funny. It'll be nice to have effects for being heavy or tune the AI a little bit.

3. Space trash is also a problem. Even if you don't try to grind it for more parts, very soon your ship is going to be at the point that a few more parts are going to slow you down dramatically, and this happened a lot in the latter part of the game, one enemy means a hell lot of parts that you don't need. I suppose half of my gaming time is spent on clearing out space junk and try not to run into any in a fight, maybe adding a manual attach mode could solve this easily?

That's my troubles with the game, all those aside, I really enjoyed it and had a great afternoon playing it. The projectile bullets, different parts, and level mechanics gave me such a blast. Keep up the good work.

Thank you so much for all the detailed feedback! We love this kind of constructive criticism. We have other projects we are finishing up right now, but once those are done we will be revisiting this one and taking everyone’s feedback into account. Stay tuned!!

Thank you for playing! This is good feedback, and we hope to improve the difficulty through various means (increasing variety of ship parts, upgrade systems, etc). Stay tuned, we aren't quite done with this game yet ;)

I had never heard of Captain Forever before, thank you so much for mentioning it! This looks like a good source of inspiration!

haha if you remake it with that aesthetic you will get a lot of people coming back to play for nostalgia.

it is easy to get lost, an arrow pointing to the portal when it is out of sight of the radar would be helpfull.

otherwise, great game. the ability to upgrade modules could be cool.

different types of weapons (missiles and as a counter point defence, a hangar bay for drones)

larger varieties (2x2 etc) would be interesting. maybe you can merge the blocks you have together into the bigger variety

Part of our original idea was making the different ship parts be tetris-shaped! However that proved too ambitious for the jam. It is likely we will iterate further on this, but we want to keep this itch page true to the jam form. If we continue with this, we will make a separate itch page so be sure to follow us if you want to see future updates!

Really nice game !
One of my favorites so far ! Congratulations for the results as well :-)
Went till Sector 21... Is there an ending ?

The game feels super good.
I really like the concept of course, it would have been super cool to have some sort of huge boss battle :D

Also the fact that there is shields, management of Mass/EnginePower. Really cool !
It could be cool to have different sort of turrets. or places where you can upgrade them to make some of them more powerfull. Or some ships letting upgrade modules.

It really funny because at start I was trying to destroy the things that were attacking me and then I learned that actually is better to destroy the command ship.

We did quite a similar concept with Spacelinks.
I don't like to sell the game like hey come play my game. But concept is so close that I thought it would be nice to know your feedback :-)

Thank you for playing the game! There is no ending, it's meant to be endless for now. We really appreciate the feedback and the ideas!

I just played your game, and its a shame I didn't find it during the jam! It was a really fun and inventive approach to the same concept. I especially loved the way the music built up with each part you added. Well done!

Sector 6 is the endscreen

Yeah, this is due to a bug we hope to fix in a small update soon! Thanks for playing the game, and stay tuned!

Hey there! No we haven't fixed that yet, since we have multiple other active projects at this time. We will release a small update with some bug fixes soon!

Fun, like Cosmoteer on the fly! However, no enemies appeared in sector 6, so I couldn't advance. The movement controls became weird when my ship became massive, too, in such a way that I could only move if I moved diagonally; pressing just one key alone did nothing. This could be really cool with more types of weapons, sounds, and improved UI (like just right-click to cancel targeting).

Hey! Thank you so much for the kind words and the feedback. We will definitely take this into account. 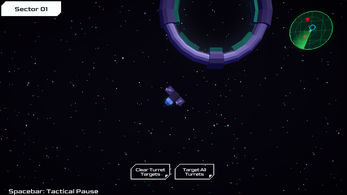 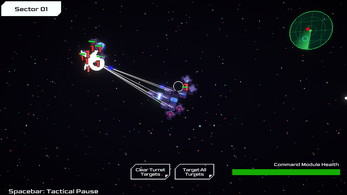 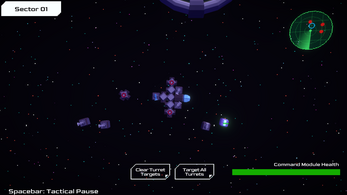 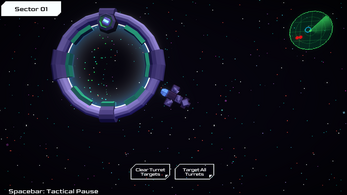